Bit by bit, man I need some bitz!

I have not had a lot of time to paint, still assembling all those little things that makes it easier to do conversions (ah, the lament for a decent bitz box!) and paint.  I have made some progress, not much, but I'm posting it regardless of anything finished.  This Adeptus spends a lot of time in the Biologis Laboratorium and has also had to spend a lot of time dealing with the Administratum Italium.  Seriously, the byzantine and glacial bureaucracy of the Adeptus Administratum must have been inspired by someone who had to wait in line for some Italian paperwork. 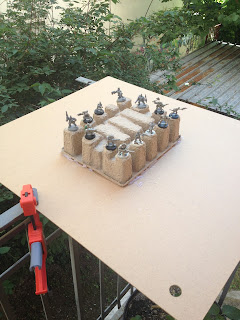 So the relative humidity finally dropped down below 70% last week and it was good priming weather.  The local gaming shops are pretty sparse for materials, but I did get some chaos black and primed the Goliath gang.  This is my balcony priming station, right above the tomatillo plants (even in Italy, a man's gotta have salsa verde). 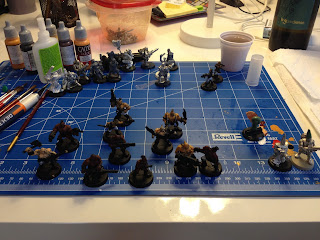 After priming, I realized I had no detail brushes, so I started with roughing in some skin tones and testing out the Vallejo Basic and Advanced paint kits I picked up on Amazon Italia.  There's enough of a diversity to cover most human skin tones.  I like diversity in my skin coloration, it makes it easier to identify models, especially when dealing with similar poses/loadouts.  The Vallejo Dark Fleshtone is fantastic, unadulterated, it's perfect for darker skin tones and I think I'll be using it a lot, just based on the way it looks.  Found a local art store that had some basic brushes that would do for detail work, time to get to work! 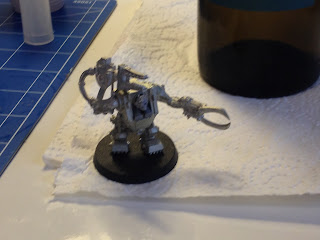 Random assembly for a combat servitor.  There's updated Pit Slave rules where they can take a combat servitor controlled by the Techno, I like the rules because it balances them out.  Of course, I'll have to mount a heavy bolter instead of the techpriest arm if I want to do that.  I'm not sure if the Ork Mega Armour is too obvious, but I like the cyberskull and arms.  I'm not going to paint this just yet, I'm waiting for more inspiration (meaning bitz). 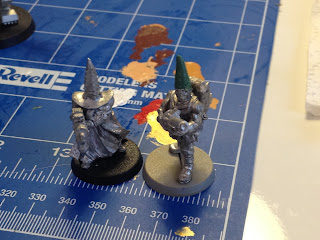 Remember that I have more Cawdor heavies that I could possibly need?  Well, in that shipment from Amazon, there was some Greenstuff, so I obligated to play with it.  The extra Cawdor heavy with a grenade launcher has decided to joint the Redemption!  As a Deacon, he's entitled to a point hat, because what shows your faith in the Emperor more than a big hat?  So I attempted to make a hat for the Cawdor heavy, he's already half a Redemptionist as it is, so just a minor conversion.  It's got some detail that isn't obvious in the photo, but I hope it comes out when painted. 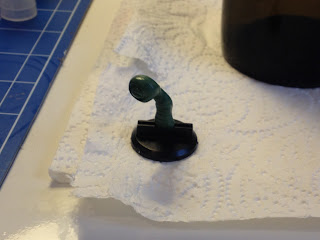 When I work with Greenstuff, I always mix up too much.  A little goes a long ways and usually use the extra to fill in gaps in the bases where the slots of the minis leave gaps.  Sometimes there's just too much left over and my new side goal is to turn those into tentacles, underhive beasts, and whatnot.  Here's an eyestalk, that will probably coming out a gaping maw when I'm done.  I think I'm going to need more Greenstuff . . .

One last thing, you might have noticed the bottle of wine in the background and you might be worried that I'm diverting funds from my hobby to pay for fancy bottles of wine.  Fortunately, an excellent bottle of wine will cost you somewhere around 4 euros here in Capmania.  That bottle of Guardiolo Bianco Sannio was on sale for 2.90 euros, so compared to even a "under control" 40K habit, I'm doing fine. 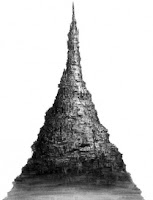 Neither will my Necromunda collection, due to limits of time and how much money I can sink into a hobby these days.

So after waiting a few weeks for things to come from Amazon (Italia) and GW (Italia), all my components have arrived.  Of course, they arrived in the order of paints, brushes, green-stuff, minis, and finally glue.  Not exactly the ideal order, right?

I brought back a bag of miscellaneous figures I had stashed at a friend's house back in Indiana.  Most of my collection went to the Arch Heretic, Mordian 7th, but some bits and pieces remained to be brought here to Italy. 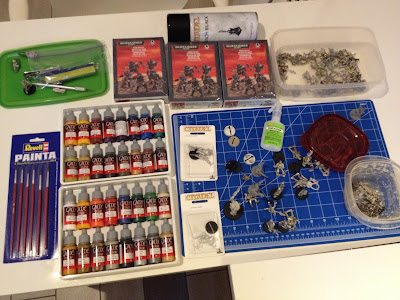 Here's the rundown of what I found in my old boxes:

What is lacking is an overloaded treasure trove of bitz, but those can be found later.

To Augment all these, I picked up three boxes of the delightful Chaos Renegade Militia, which come with great weapons and a good variety of poses.  In addition, I got two of the classic Imperial Preachers for conversion into Redemptionists.

So where to start?  First, I'm going to put the Goliath gang together and start painting.  While I'm doing that, I'll also put together a Chaos Cultist gang (thus the Renegade Militia).  There's multiple version of rules for the Chaos Cultists, some with Spawn and mutations, another with a Daemon Host, I might just model enough figures to do both types, though one of those versions is hellaciously over-powered.

I might use the leftover bitz to whack together some Scavies, I've got some ideas on how to make Scalies that actually look good, but that's for another blog post.

Posted by Adeptus Michael at 11:55 AM No comments:

Adeptus Michael
SALERNO, SA, Italy
My name is Michael and I'm a recovering Warhammer 40K player. These days I'm interested in resurrecting my old miniatures hobby by strictly limiting it to Necromunda. This blog is devoted to my efforts to re-build a lost collection of Necromunda terrain and miniatures as well as my getting back into modeling and painting.

Friends of the Underhive